We wanted to thank you for putting together a fantastic vacation for us. All of the components were all that we had hoped for. Cape Town was a great way to start. Parts of its shoreline were reminescent of the Monterey Peninsula in CA. The wine country reminded us of Oregon and of course wine tasting was a highlight. The two days with Steve, our Cape Town guide, were just great.

The Okavango Delta was a highlight, and we loved the experience of all water game viewing.  The camp was as nice as depicted on-line. Our guide Kam was excellent as well – young and full of enthusiasm but also very knowledgeable. We couldn’t have enjoyed our stay there more.

Then off to Savute, which couldn’t have been any more different than the Delta, but just as interesting. Our guide Qwist was like Kam-great. Just like our other stays, the staff there treated us royally and the camp was very nice. Just very good choices that you made for us.

My only regret is that we didn’t stay an extra day at Victoria Falls-yes, to try again for Tiger fish. But that’s on me for insisting on a one-day stay. You were correct- the Stanley Lodge was a very special place-just the right place to relax after 2 weeks of traveling around on game drives.

Going into this trip we felt that it was going to be a once in a lifetime vacation. At the end of our 3 weeks, we agreed that at some point before we are too old to do so, we should go back to Africa, perhaps during a different time of year (June/July?) to experience Southern Africa shortly after the rains, which is something that all of our guides suggested so that we could see the “other” green Southern Africa. Whether we end up doing another trip, only time will tell. But both Barb and I are very grateful for all the help you gave us in making this trip such a memorable experience.

My October 2015 travels to Tanzania were wonderful: very rich game viewing in the Northern Serengeti (the crossing of the Wildebeest at the Mara River was, as always, quite  a spectacle), a truly remote bush camp experience in Katavi National Park in Tanzania’s Western Corridor, and finally Chimpanzee trekking at Mahale National Park on Lake Tanganyika. 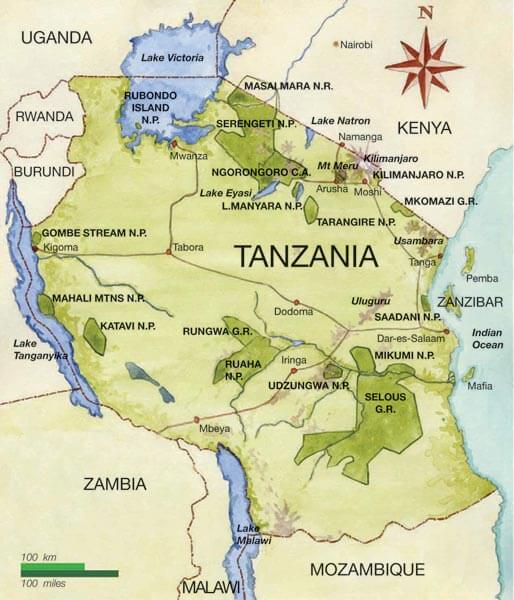 Katavi National Park is located in the much less travelled Western part of Tanzania.  It is my first visit to this area and I loved the remote experience, away from the crowds of the Serengeti & Ngorngoro Crater.  In my opinion, explorations of these lesser-travelled national parks are a must for a well-rounded Tanzania itinerary.  Katavi is an opportunity to experience the real Africa, very remote, good (if basic) camps with all necessary conveniences and a stunning diversity of landscapes. Within 70 miles you go from open Savannah to a tropical looking environment with lots of growth, particularly an abundance of palm trees. 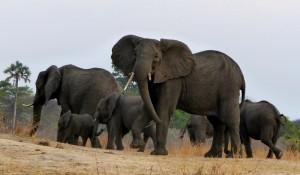 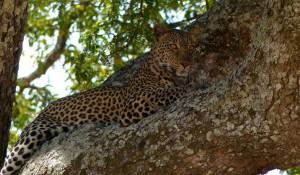 After Katavi another flight to Lake Tanganyika – Mahale National Forest. After landing at the airstrip, a dhow waits at the edge of the lake to take guests to Mahale’s Greystoke Lodge.

The white beach and the thatched, high peaked buildings of the lodge is reminiscent of the South Pacific. The immediate backdrop of the tropical beach scene of the lake is the escarpment of the Western Great Rift with dense forests and mountain peaks up to 8,000 ft. Very dramatic and stunningly beautiful.

The lake has an abundance of fish. Guides on the boat provided simple fish line (no reel, just a hook at the end – as you see in South East Asia) and everybody that had a go at fishing pulled out a beautiful, yellow-colored iridescent fish, at least 1 ft. in length. Some of the fish was served for appetizers as sashimi (delicious)and most of it was used as food for the mascot of Greystoke Lodge, an orphaned, habituated pelican named Big Bird.

Chimpanzee trekking is arranged similar to the process in Rwanda for the Mountain Gorillas. Only 12 people can go up per day; the group is then split into 3-4 each, based on physical conditions. There were 3 guides from the lodge and 3 wardens from the park authority to watch that all rules are strictly enforced, i.e wearing face masks whenever around the chimps, no eating/drinking, no pointing, no direct eye contact and, of course, no touching. The park wardens were instrumental in getting us into the thick growth, by using their machetes to create small openings for trekkers to gain access.

The trek is fairly arduous, steep, hot and long but it is worth every effort. The experience is very lively with a cacophony of shrieks, chimps running up trees, young ones swinging from tree to tree and some chasing around on the ground.

After a while the initial ruckus calmed down and our guides lead us to openings where we could sit down and observe the group at length. From that point on they were very relaxed, the males lying down on the ground and taking short naps, grooming themselves, looking around and slowly acknowledging our presence. And when it came time for them to move on they very calmly passed right through us. The small families are fun to watch, especially of the babies that are doted on.

The trek down passes a Japanese research center from Kyoto that has been in the Mahale National Park for 50 years, studying the M-Group. This group consists of about 60 members, many of which we saw.Jane Goodall’s chimps and her research center are located in Gombe National Park, two mountains away, also on the shores of Lake Tanganyika, where a group of approximately 30 is left.Overall a fantastic return to one of my favorite countries in East Africa – with lovely experiences, both new and old.  To observe these close relatives of ours was the highlight of this trip.

For travelers with a layover in Dubai, here is an interesting walking tour from National Geographic.

The tiny Bastakiya quarter is Dubai’s most engaging neighborhood. Established at the end of the 19th century by well-to-do textile and pearl traders from Bastak, Iran, its labyrinthine lanes are lined with restored merchant’s houses, art galleries, cafés, and boutique hotels. “The Bastakiya is a picturesque step into Dubai’s past. It’s big on atmosphere and a delight to wander.”—Sarah Monaghan, author, DK Eyewitness Travel Top 10 Dubai.

Begin the tour in the morning with a cultural breakfast at (1) Sheikh Mohammed Centre for Cultural Understanding (www.cultures.ae). The center is housed in one of the Bastakiya’s most elegant buildings, with a beautiful courtyard, pretty decorative grilles, hanging oil lamps, and wooden lattice on the second floor. The cultural breakfasts are a rare opportunity to meet Emiratis and learn about local heritage and traditions. Go upstairs for views of the Bastakiya rooftops. Note the wind towers. This traditional form of air-conditioning, constructed to funnel cool air into the house, was an architectural feature of buildings in southern Iran.

Outside, turn left and walk toward the waterfront to admire (2) Bastakiah Nights restaurant in another beautiful courtyard house. The staff is pleased to show people the traditionally decorated rooms and fine views of Dubai Creek from their rooftop.

Stroll down the sandy lane to the modern white mosque, noting the splendid architectural details of the grand gypsum, coral, and limestone buildings, in particular the carved wooden doors with brass knockers and the intricate patterned decorative grilles.

Turn left at the end and walk until you see the last remaining section of the (3) Old City Wall. Constructed in 1800 from gypsum and coral, the defensive wall surrounded the old town of Bur Dubai, which included Al Fahidifort and the old Grand Mosque.

Next door is (5) Ave Gallery, a new space opened by exalted Iranian artist, art collector, and curator, Fereydoun Ave. Behind Ave is (6) Majlis Gallery (www.majlisgallery.com), Dubai’s oldest commercial art gallery, here since the 1970s. Situated in another beautiful house, Majlis specializes in more mainstream art such as Asian oils and watercolors of desert landscapes, along with calligraphy and sculpture. Find a souvenir among the beautiful ceramics, handicrafts, and jewelry.

Across the lane, stop at leafy (7) Arabian Tea House Restaurant & Café, in another splendid courtyard house. Try the Basta Special, a refreshing mint and lime drink. 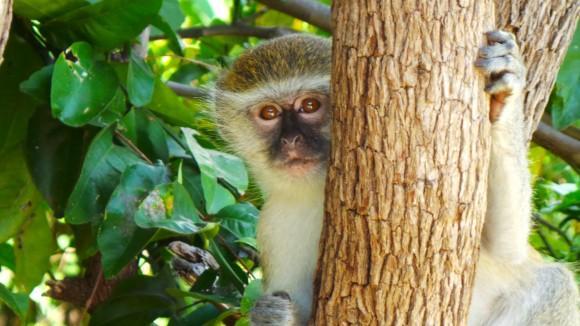 I don’t know how you do it! We are: amazed, awestruck, and can hardly believe our good fortune for the experiences we had on our trip.

To start with…every detail of our transportation was flawlessly coordinated. Down to the river crossing by boat at Kasane and including the bush pilot of 22 years of age who made perfect landings and take-offs each time!

The people we met were delightful at every stop and the guides were so helpful in explaining things to us about the culture, the animals on the game drives and what to expect relative to our daily schedule and how to maximize our experience.

From our bed and breakfast in Cape Town, the game reserve in South Africa, at Victoria Falls and in the Okavango Delta and all points in between – our accommodations were delightful. We did so enjoy the bird house at Tongabezi Lodge but our cabin by the river was also terrific with the sounds of the hippos lulling us to sleep.

And at Kanana Camp – I had no idea frogs could sound like wind chimes! 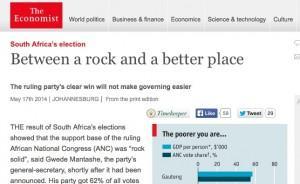 An interesting analysis from The Economist regarding the May 2014 elections in South Africa.

Read the full article at: http://www.economist.com/news/middle-east-and-africa/21602276-ruling-partys-clear-win-will-not-make-governing-easier-between-rock-and